Following the signing of the peace settlement, known as the Treaty of Versailles, at the conclusion of WORLD WAR 1, Poland annexed a portion of German lands. Adolf Hitler, Fuehrer and Reich Chancellor of Germany, used this annexation as a basis for a strong campaign to expand Germany’s territories, including Austria and Czechoslovakia.
Austria fell in 1938 and by 1939 all of Czechoslovakia was under German occupation. Britain and France were anxious not to repeat the terrible carnage of WORLD WAR 1 and sort appeasement at any price.
Germany invaded Poland without warning and by the evening of September 3rd 1939, Britain and France were at war with Germany and within a week, Australia, New Zealand, Canada and South Africa had also joined the war. The world had been plunged into its Second World War in 25 years.

On September 3rd 1939 Robert Gordon Menzies, Prime Minister of Australia announced to the nation:
“Fellow Australians, it is my melancholy duty to inform you officially that in consequence of a persistence by Germany in her invasion of Poland, Great Britain has declared war upon her and that, as a result, Australia is also at war.”
The Australian Government had to decide whether to commit troops to fight along side British forces or defend its own territories against a possible Japanese expansion. By 1939 Japan had invaded Korea, China and Hainan Island. Following assurances that Japan was non-aligned, and that Singapore could prevent any advance from the north, Australia committed forces to Britain to fight on the European front.

A number of Australian pilots flew in the Battle of Britain in August and September of 1940. Australian troops joined with allied forces to fight the enemy in the Mediterranean and North Africa. At the siege of Torbruk between April and August 1941, up to 14,000 Australians defended valiantly against repeated German attack.

The surprise attack by the Japanese on the American Naval Base at Pearl Harbour on Sunday the 7th December 1941 bought the United States into a War in the Pacific and by the end of 1942 the Japanese occupied most of south-east Asia. 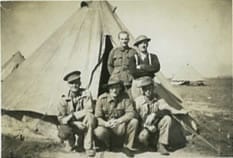 Australian troops were involved in complex jungle warfare in New Guinea, Borneo, and Bougainville in an effort to defeat the Japanese. They defended Singapore until its surrender with the loss of an entire Australian Division.
The most grueling of the campaigns took place on the Kokoda Track, New Guinea, where a series of battles took place between 1942 and 1943.
New Guinea was an Australian protectorate and Australian security was directly threatened. The Kokoda Track became a defining moment in the consciousness of all Australians and is remembered as a turning point in the Defense of Australia.
Women played a vital role in World War 2, serving in the Australian Imperial Force (AIF) as nurses, the Women’s Auxiliary Air Force (WAAF), Women’s Royal Australian Naval Service (WRANS), The Australian Women’s Army Service (AWAS) and the Women’s Land Army (WLA).

The war in Europe ended on 8 May 1945 when Germany and the Axis powers surrendered unconditionally. Japan accepted unconditional surrender on the 14th August 1945 with the signing of the official surrender document on the Battleship USS Missouri in Tokyo Harbour on the 2nd September 1945. 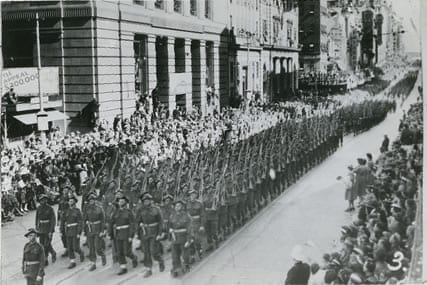